Surely you’ve considered Aphex Twin and Chuck D teaming up in a studio… well that’s pretty much the explosion you get with Baltimore noise-gangsters Food For Animals. Food For Animals are bass-terrorist and producer, Ricky Rabbit, and super-charged MCs Vulture Voltaire and Hy. Their debut EP Scavengers is a joint release between Upper Class Recordings and Baltimore’s Muckamuck Produce.

“Hip-hop beats, especially in the underground and indie scenes these days are always just bordering on going full blown crazy, so Food For Animals (aka Ricky Rabbit and Vulture Voltair) just decided to take it way over the top and fuck people’s ears up.” – MC Vulture Voltair

“We blow all samples to bits, piece them back together, and use what we need. We also listen to everything; you know, keep an ear out for any usable material and use it in a new way. Instead of looping the lovely recognizable part, we make new ones out of the old bits. Technology (I should clarify, “music technology”) is a wonderful thing and if you’re willing to scrounge, we’ve found that you can create a whole setup for free. “Scavengers” is our testament to that. I borrow or pay homage to lyrics on some of the songs (like Bob Dylan on “Brand New”) and Ricky borrows everything and makes sure you can’t tell what it was. And then our main man Dr. Dan helps us record it on the downloadable version of pro tools. We like existing outside of the US money machine as much as we can. I mean, culture is so fucked right now, and adhering to one set of “standards” or George Bush’s moral center is going to bury us all. We want to explore, to take what we think is great and use it to create new things.” – MC Vulture Voltair

“These masterminds at work wobble your conscience and makes you think more than twice. All the while, the lyricist Vulture immediately spits with the voice of a stressed out teacher with a message he wants you to understand, even if it means the death of him. Rik Rab is the nerd behind the detailed beats. No “head” could make beats like this.
It’s an intelligent nerd behind the boards and don’t be fooled, this is rap. This is gangsta. This is Food For Animals and you must see them live.”
-Fort Drastic

“Food for Animals step up to the plate and mostly obliterate the rhythmic conventions we’ve come to expect from hip-hop. This isn’t skittering, hiccupped eski beat or minimalist schiz-hop pong hits; what remains after DJ/producer Ricky Rabbit goes Rick James all over his ProTools setup sounds like a field recording from a sheet metal factory getting flattened by a herd of bulldozers. In fact, it isn’t until two minutes into this 20-minute sound test that any semblance of a beat settles for MC Vulture Voltaire to rap over. But once he rolls through Rabbit’s swarm of killer beats with a brassy, heavyweight tone, the gravity is difficult to ignore.”
-pitchforkmedia.com

“Food For Animals’ disposition is truly authentic, reinventing hip-hop (again) to convey its message for a new context, accurately and convincingly. The musical soundtrack is ideal for the thematic subject matter of the album. Songs like “Cut and Paste” and “Scavengers” exemplifies Food For Animals’ ruggedness and affection. And while today’s electro hip-hop becomes convincingly more mainstream, Food For Animals hammer its context with brutal energy and frenetic force.”
-Tiny Mix Tapes 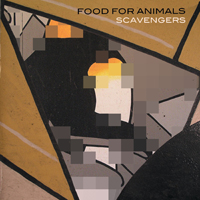