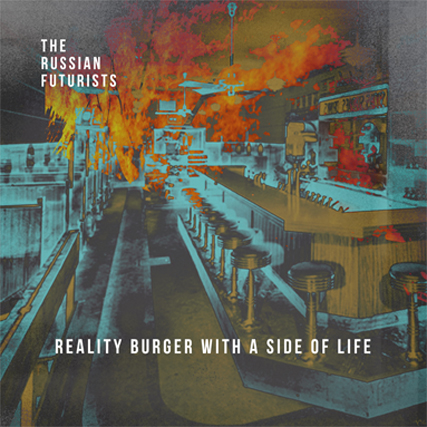 The Russian Futurists, the long-running indie-pop project of Toronto musician Matthew Adam Hart, haven’t released any music since 2010’s  “The Weight’s on the Wheels”  That changes today. Because today, Hart is releasing a new EP/mixtape called Reality Burger With A Side Of Life as a free download. As he explains in a statement:

I put out my last actual record in 2010 and never stopped making music, doing it for fun makes the music infinitely more satisfying. I have hundreds of unfinished songs and these are the ones that seemed to deserve my attention. I’ve always loved making sample-based music and this project is a snapshot of what I get up to on most nights with my sampler. I’ve always wanted the Russian Futurists to be the sound of me with too many drinks etc. in my system in my basement; the distillation of Eric B. & Rakim, the Alchemist, and the Cocteau Twins all hanging out around a bunch of dusty records.”

The EP is only seven tracks and 16 minutes long — including an intro, an “extro,” and a 30-second interlude, plus a collaboration with fellow Toronto producer Swim Good Now. As promised, it’s the Russian Futurists as sampledelia, with Hart piling his usual exuberant hooks atop a patchwork of older soul, R&B, and pop songs. Chow down on that delicious Reality Burger With A Side Of Life .